The International Criminal Court against Child Kidnapping exists to fight for the human rights of victimized parents & their wrongfully retained children to stop crimes against humanity. This includes legal actions against your spouse, as well as legal actions against taxpayer funded human trafficking of wrongfully retained children, harboring of illegal immigrants & Governmental child kidnapping with clear violations of international laws and treaties for the protection of the child!

When "left behind" parents and their offspring have been mistreated by corrupt Government officials, it’s time to restore your human rights! We only act in your child’s best interest, and make this always our top priority to restore their human rights, reunite you with your children by enforcing International Laws and Treaties to hold all "bad actors" accountable!

International child abduction occurs when a parent, relative or acquaintance of a child leaves the country with the child or children in violation of a custody decree or visitation order. Another related situation is retention, where children are taken on an alleged vacation to a foreign country and are not returned. 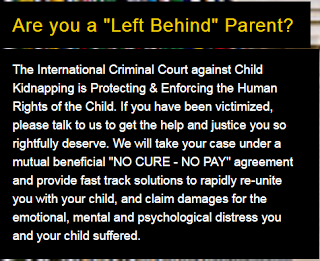 ​Whenever one of the parents, takes a child out of the jurisdiction without authorization of the court that granted the sole or joint custody, or violates any international terms or treaties of a valid court order, that is considered as International Parental Child Kidnapping/Abduction.

​Abductors may be other family members or their agents. Although in most cases the abductor is a child’s parent. This crime may include incidents in which children are detained or enticed away from the custodial parent. Criminal custodial interference can also be defined to include interference with a court order of, time- sharing visitation or access.

​Every year, more than 200,000 cases of international parental child kidnapping are reported in the United States alone. It is common for the removal of a child to occur during a heated or emotional marital dispute, in the early stages of separation or divorce, or in the waiting period for a court custody order or agreement.

​Way too many cases of international Parental Child Kidnappings INTO USA have been reported from countries all over the world, including Australia, France, Brazil, Canada, Colombia, Germany, India, Japan, Mexico, Philippines, Spain and the United Kingdom. It makes us wonder… What is wrong with the corrupted judicial Family Court System in the “Land of the Free”?

​Why doesn’t the USA comply normally with the rules and policies established by The Hague Convention? Instead, the USA is violating the human rights of these abducted children, who are mostly brought as illegal aliens, keeping them wrongfully retained in the country. Obviously, this is a strict violation of US Federal Immigration laws as well as a violation of international laws and treaties, such as the United Nations Convention for the Protection of the Child and the UN Human Rights Convention.